Very recently in Florida (of course), actual, swastika-waving, seig-heil saluting, U.S. Nazis were on the side of the road harassing drivers. 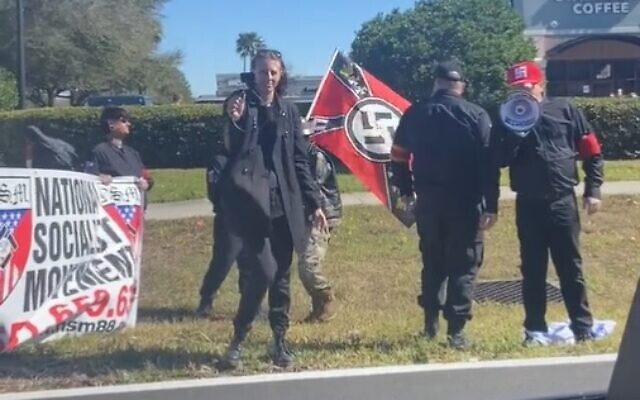 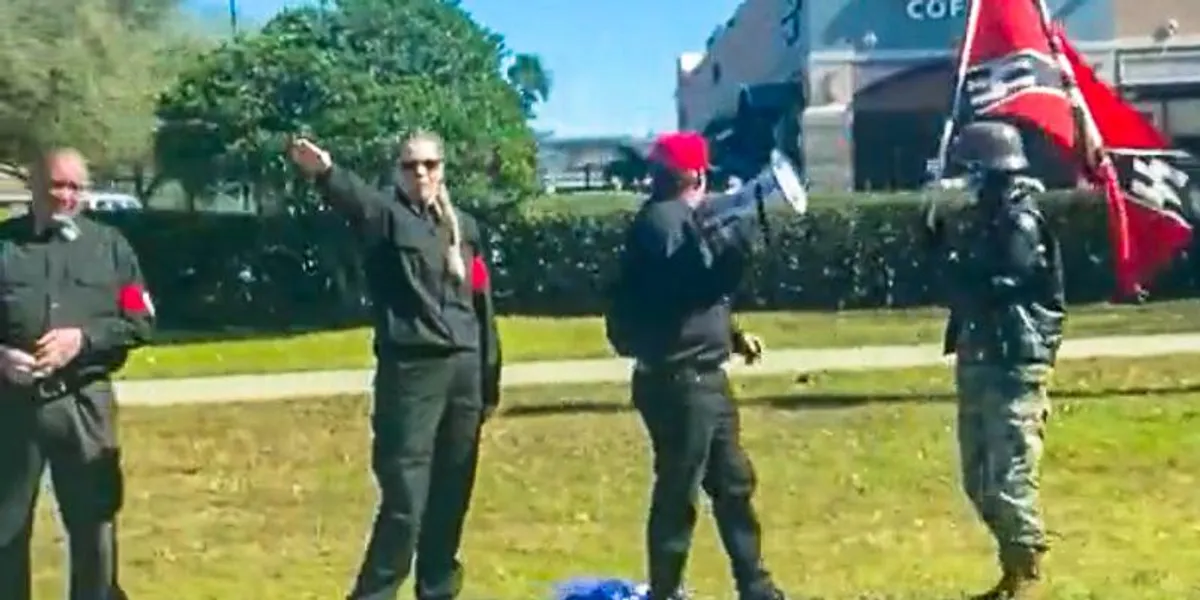 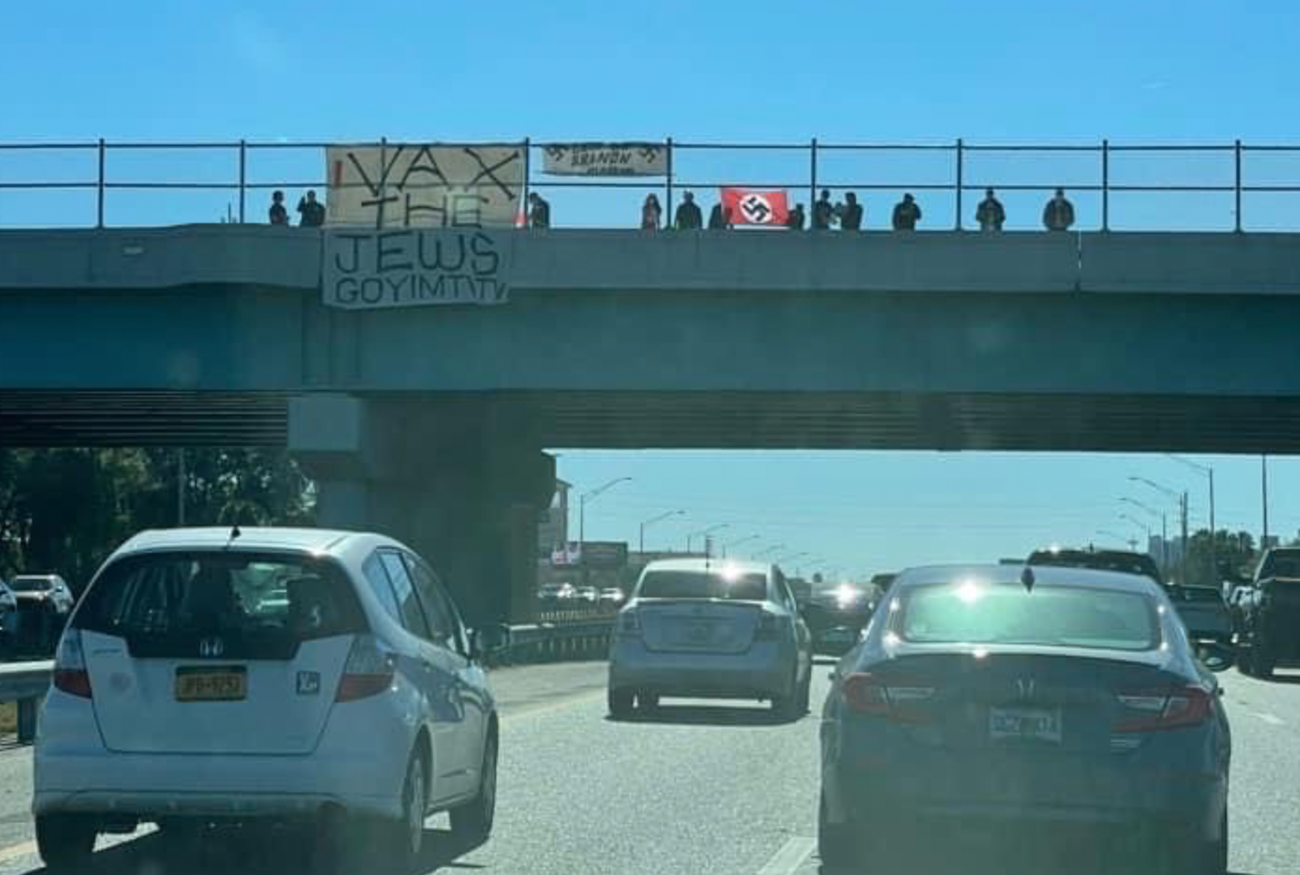 Nazis are a great source of unintentional irony.

If you’re a non-conservative, then by now you’ve likely heard conservatives desperately grasp at comparisons between liberals and fascists. To anyone with a modicum of education, that’s a blatant admission of ignorance. It’s also an obvious attempt to deflect from their own very fascist tendencies.
When they try to make these comparisons, they get exactly and only two things right:
“Democrats started the KKK!”
-And-
“‘Nazi’ stood for the ‘National Socialist Party!” 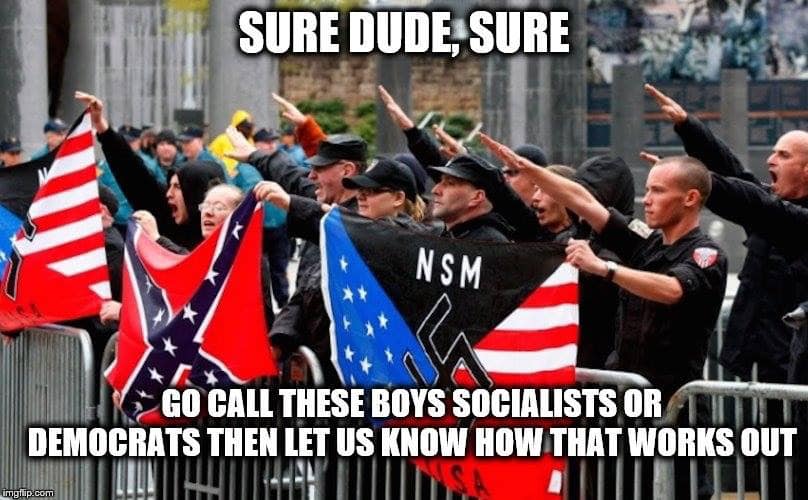 Of course, anyone who’s passed all their high school history classes (without cheating) knows how ridiculous and ignorant such suggestions are. We know from history that the Democrats were pro-slavery when they were the ‘conservative’ party. But during the civil rights era, the Democrats slowly transformed into the ‘liberal’ party. We know that the reason the Nazis put ‘socialist’ in their name had nothing to do with ideology, but was, in part, a ruse to get the support of the working class.

If you’ve encountered these coming from a conservative, you’ve probably attempted to explain the history to them, to ‘educate’ them… to no avail. There’s a reason for that (beyond the explanation at the link); they don’t care about the history. They ONLY care about satisfying their own need to make ‘liberals’ the ‘bad guys’.

In psychology, we learn that people have a tendency to employ defense mechanisms rather than face uncomfortable truths about their own beliefs and behaviors. The most common such mechanism is called ‘projection. Per Wikipedia:

“In its malignant forms, [projection] is a defense mechanism in which the ego defends itself against disowned and highly negative parts of the self by denying their existence in themselves and attributing them to others, breeding misunderstanding and causing untold interpersonal damage.”

This is where it gets a little bit complicated: It’s more than just ‘projection’. There’s a question that I ask conservatives that pins them down on their true beliefs (I have a few, but this is one of my favorites): 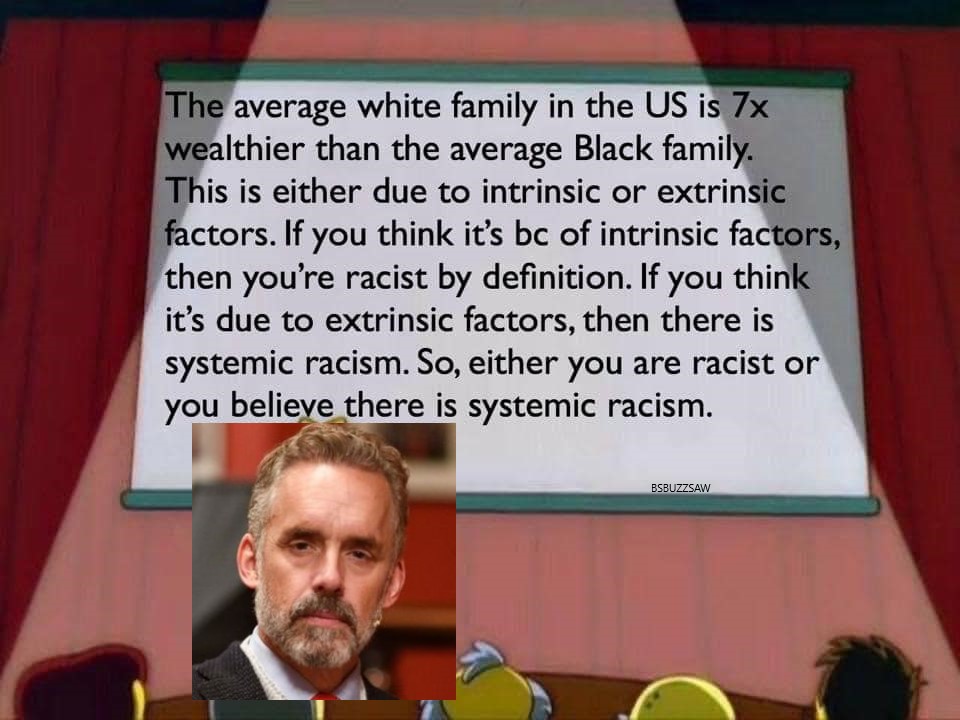 Nearly every conservative I’ve put this question to refuses to answer it. There are no other possible explanations, so they know that if they say what they really believe then they’re admitting they are racist, but they simply cannot admit that systemic racism exists.
Why? Because, obviously, they’re racist. In their heart of hearts they believe that PoC are somehow ‘inferior’, ‘more criminal/violent/lazy’, whatever. I love when they say, “I can’t be racist, I have Black Friends!” (or wives/cousins/employees/etc). All that means is that they’ve made an exception to their racism… and their ‘friend’ apparently has low standards. If you ask them, “Why do you consider them your friend?”, you’ll get some variation on “They’re one of the good ones.”- Which is hella racist.

So they know they’re racist. That’s what makes this dynamic more complicated: They have to believe that their ‘enemies’ are ‘really the racist ones’ in order to justify their own racism. It’s okay for them to be racist, but by ‘liberals’ being both ‘the enemy’ and ‘also racist’… that makes liberals worse. And the irony is completely lost on them.

Let’s go deeper: WHY the racism? WHY is it so prevalent among conservatives? That, actually, has an easy answer: “Fear”.
“But wait…”, you say, “Don’t they own lots of guns, drive big trucks, act tough, and believe a big Sky Daddy is protecting th…. Oh, now I get it.” 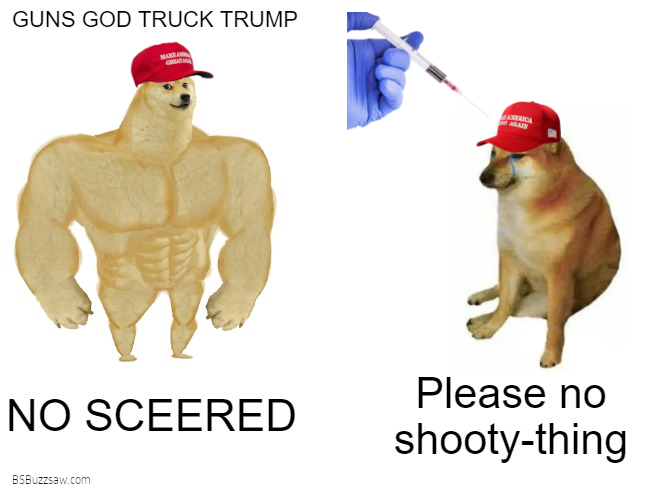 In the animal kingdom, looking tough is a survival tactic. If you appear to be big and scary, other predators, who tend to be very selective on their risk-reward math, tend to leave you alone. We live in a (relatively) more civilized world than we used to. The problem is that conservative’s brains haven’t caught up with that fact. The reason? Conservatives are essentially evolutionary throwbacks. I know how it sounds, but it’s not an ‘insult’; it’s just an observation no different than “You’re bald”, “You’re male”, or “You have an amazing penchant for midget porn”. It’s not even a ‘judgment’. It’s just stating an ascertainable reality. They really don’t have much of a choice because, like being gay, a natural artist, or even autistic, they are born that way. There’s an argument for nature vs nurture, but neural architecture plays a strong role in how someone will turn out in life. In conservatives, that neural architecture is based on fear.

– Round and round and it never sinks in. There are rational fears that make carrying a gun practical… but they are still fears.

And now we get to the heart of the matter.

“Fear” is at the core of any fascist movement. Fascists never admit this, but they dance around it as the above example illustrates. Conservatives are highly susceptible to being manipulated through their fears because they have more and deeper fears than non-conservatives. It’s what MAKES them ‘conservative’. It’s also what makes them vulnerable to a fascist ideology.
Before civilization, back when tribalism was our best evolutionary strategy, it made sense to form groups of people who looked, behaved, and believed alike. We knew we were ‘safe’ in our tribe, which made ‘everyone else’ a ‘threat’. We determined our security based on our similarities. That meant that ‘different’ was ‘dangerous’.
We got by on that hardwiring for millions of years.

We have seen throughout history how demagogues use fear to gain support. The formula is super simple;
Step 1) Tell people who are prone to fear of ‘others’ that those ‘others’ are an imminent threat to their livelihood, their beliefs, and their very lives.
Step 2) Tell those same people that only you can save them from that threat.

A fascist ideology is one where its adherents believe that they will ‘only be safe’ when they have full power and control over everyone that they don’t like. That seems to often wind up getting to a point of genocide because the ONLY way to ensure that their ‘enemies’ can’t hurt them is to eliminate them permanently. That’s exactly what Nazis ultimately want: the eradication of everyone who doesn’t fit their tribal identity. They need to ‘get rid’ of everyone who they’re afraid they can’t control… which is pretty much anyone not like them.

I’ve found an excellent video explaining the whole dynamic from the perspective of why anti-fa came about and why fascists ultimately have to kill everyone they don’t like. Watch it here if you get the chance. It’s just over an hour, but it’s totally worth it.

I also have a little game I like to play on social media. It goes like this: 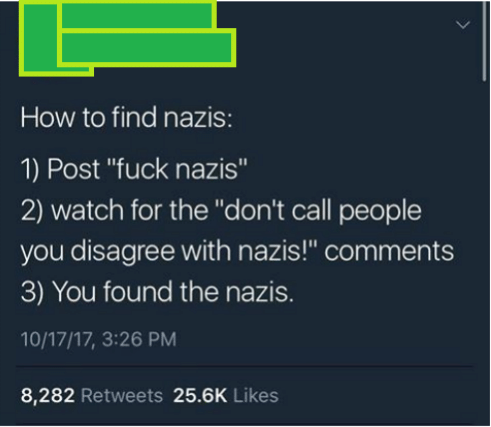 … and it really works.

All that aside, we have a problem: Nazis.
Then we have a larger problem: Conservatives who are sympathetic to Nazis because of the way they’re wired.
That brings us to the terrifying problem: Those conservatives have been manipulated by their media to believe that ‘Liberals/Muslims/PoC/Non-Christians/LGBTQ+/Immigrants’ are an existential threat to their way of life. That is EXACTLY how otherwise decent Germans were convinced to go along with the Nazi agenda, and it’s why we have so many conservatives who are perfectly willing to completely undo democracy in order to establish a regime that will keep themselves and their white Christian primacy ‘safe’.

These Nazis have come out of hiding because of the sense that ‘their enemies’ are at the gate and ready to pounce. The Big Lie of the stolen election is what is bringing them out of the woodwork and pulling them all together. Now, we are seeing exactly how ‘it can happen here’, because while not all conservatives are Nazis, they have certainly, demonstrably, and absolutely been convinced to support the Nazis among them.

Even if they don’t admit it out loud.