When it comes to the debate over the 2nd Amendment, I tend to come down on the side of the individual right to keep and bear arms. This is because I believe in a universal right to self-defense. Most people do not train to be kung-fu ninjas (snicker), MMA fighters, or knife experts, or can afford to walk around in electrified plate armor. So if you’re untrained, older or infirm, or just can’t otherwise deal with an aggressor, armed or otherwise, a gun is the most effective and easily attainted and operated equalizer for self-defense. Period.

But that doesn’t mean that everyone ought to go around sporting a semi-automatic rifle whose only purpose is to effectively put down large numbers of people in such a way that they will never get up again. In fact, if you can’t defend your home and person with a shotgun, a pistol, or even a bolt-action rifle, then you have bigger problems than an AR-15 can solve. I’m fine with the idea of defending ones’ self and home with pretty much anything you want. But to turn the oft-repeated phrase, “If they couldn’t get a gun, they would have used something else.” … on its head, might I suggest that improvising with regular household items should therefore be just as effective as a gun. 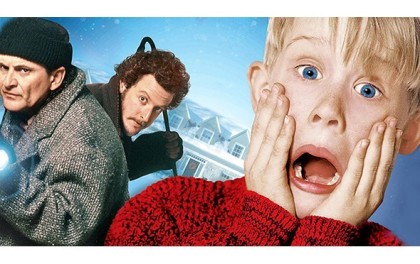 “Yeah, that’s exactly how that works.”

So a conservative, gun-loving friend on the social media posted a video, I laughed at it, and then he absolutely insisted that I ‘just try’ to take it apart. Normally I don’t do videos like this because frankly, it doesn’t rise to the level of propaganda we deal with here and I just couldn’t bring myself to put it in the ‘BS’ category even though it’s just plain stupid. So I created a new category!

But he and his buddy literally asked for me to do this, and I quote: “He’s just another liberal who runs his mouth and don’t know shit they can never prove you wrong just run their dick hole.”

How can I resist such an eloquent entreaty?

The video was created by a seemingly nice enough young man named Jason A. Ward who is possessed of the intention to make people’s concerns about different types of guns seem silly. To be honest, he makes a decent attempt to do so. But as usual with such attempts, the points he brings up seem to ignore a great deal of information that would be damaging to his main point that “Gunz is Gunz”. It’s not nearly as good as some of the more monstrous , sophisticated videos I’ve taken down, so let’s just make this quick and painless.

Here is the video:

It’s quaint…  in the ‘laughable’ sense of the word. He begins by holding up a semi-automatic pistol and then a rifle, and then says, “This gun [the rifle] shoots the same exact bullets as this gun [the pistol]”. Then he holds up the pistol magazine and the rifle magazine which both appear to be loaded with .40 caliber rounds (It’s been a while since I’ve been to the range, so I might have the caliber wrong). But the bullets are indeed the same.
The obvious message here is ‘there’s no difference between these guns ‘cause the bullets are the same’. Which he immediately proves wrong in the first way when he holds the magazines up vertically to compare them side by side:

So there’s ‘no real difference in the guns’ except for the fact that the rifle can discharge a LOT more rounds before reloading. But what he also seems to conveniently leave out is that when bullets leave different guns, they tend to have different muzzle velocities. The basic principle is very simple: The more time the round spends accelerating out of the barrel as the gas expands behind it, the faster it gets. The longer the barrel, the higher the muzzle velocity, the higher the muzzle velocity, the more energy the round has which means it can travel farther and do more damage . There are other mitigating factors, but this is nonetheless a substantial difference between a pistol and a rifle.

In that alone, the bullets may be the same, but the guns themselves and their range, accuracy, and lethality are not.

He then holds up a very pretty AR-15 with a vertical grip, under-mounted light or laser, and decent recoil-reducing stock and says, “This is an AR-15, what some of you call an assault rifle.” Yes, ‘some of us’, as in; people who can understand what does and does not fit the definition of ‘assault rifle’.

“An assault rifle is a selective-fire rifle that uses an intermediate cartridge and a detachable magazine.” Per Wikipedia.

Okay, so civilian AR-15s are not selective fire. Two out of three ain’t bad. But again, in his ‘gunz is gunz’ narrative, he then holds up what appears to be a bolt-action 30 ought 6 and says that “It’s wood, pretty, and it only shoots deer”. I’ve fired a 30 ought 6 before. They kick really hard. But I don’t ever remember not having to worry whether it was pointed at a person because it ‘only shoots deer’. He goes on to try to make the case that because the 30 ought 6 uses a bigger ‘meaner’ looking bullet, it must therefore be a much more dangerous weapon than the AR-15.

There’s obviously a lot wrong with that, but I’ll admit that yes, the .30-06 caliber cartridge is larger because it contains more propellant. This is obviously to give the slightly larger round high enough velocity and range, which of course you want when hunting because getting close to game in what is effectively their own living room isn’t as easy as some might think. Funny thing though, the muzzle velocity of an AR-15 tends to be a little higher than that of a 30 ought 6.

Okay, so in the hands of a good tactical marksman, the type of grip is really the least important one of the three.  But between the first two and the fact that .223 rounds are just fine at killing people, we can see how this attempt to make the “Deer only” rifle look deadlier is straight out laughable.

After that, he just gets downright silly. He pulls up a 30-30 lever-action rifle and calls it a ‘Cowboy Gun’. Leaving aside that this is another low-capacity, slow fire rate rifle compared to his AR-15, he then goes on to explain, “If I attack someone, with the cowboy gun, it automatically becomes an assault rifle.”.
So if I am to understand him correctly, the US armed forces can save money by sending troops into the field with lever-action 30-30 rifles which miraculously become ‘assault weapons’ which are just as effective as AR-15s? 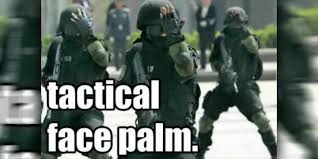 He then attempts a comedy bit where he tries to reinforce his point with a golf club:

“If I were to hit someone, this would become an ‘assault nine-iron’.”

Aside from the failed semantic superimposition, this was definitely one of the parts of the video that made me laugh out loud.  I get the point: a gun is only dangerous to someone if it is used to shoot them. Tell you what though, I’ll take the assault rifle for when an attacker wants to turn his golf club into an ‘assault nine-iron’ any day of the week.
So we’re now in the “Anything can be dangerous” narrative. This is obviously stupid in how he dismisses the level of lethality of different weapons throughout the video (until the end).

Then he does a bit where he touches on the ‘guns don’t kill people’ axiom which is of course true. He shows the AR-15 and the ‘Cowboy Gun’ propped against the wall and says, “Both of these guns will sit here until I move one.” Then he does a little bit where he makes like the AR-15 is bouncing away. “Oh come back gun!”.

But to finish off the video, he tosses a silly twist into his theme by depicting an armed robber with a rifle coming into his home while he is holding a Nerf gun. 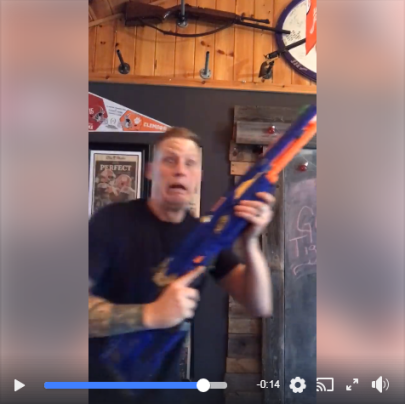 So apparently some guns ARE more dangerous than others.

One thought on “Misfiring Blanks”