On the morning of On November 27, 2015 in Colorado Springs, Colorado, Robert Dear Jr. pulled into the parking lot of the Colorado Springs Planned Parenthood. Ke’arre Stewart, 29, had just stepped outside to make a phone call when Dear shot him with a semi-automatic rifle. Stewart made it back into the facility to warn the people inside that an armed man was coming, whereupon staff attempted to move everyone to safety while he succumbed to his wounds. At some point before police arrived, Dear also shot and killed 35 year-old Jennifer Markovsky who was there for a friend of hers, and University of Colorado Colorado Springs police officer Garrett Swasey, 44. After police broke into the waiting room where Dear was holding out, there was an exchange of gunfire. Eventually Dear surrendered and was taken into custody. By the end of the attack, 9 other people, 5 of whom were police officers, had been wounded and taken to hospitals.

Before his arrest, while being arrested, and during the interview after his arrest, Dear was rambling, barely coherently, about his anti-abortion ideas, the government, and Obama, but he uttered one very clear, particular, and peculiar phrase repeatedly; “No more baby parts!“.

Even in the anti-choice movement’s parlance, ‘Baby parts’ isn’t a regular buzzword. It really wasn’t a phrase they used as a stand-alone description of any procedure… until the video came out.
Four months before Robert Dear would storm a medical clinic and murder innocent people, a video was released by an organization with the misnomer; “Center for Medical Progress”. The ‘CMP’ was actually a front for its director, David Deleiden, to set up a ‘sting’ operation whose goal was to entrap Planned Parenthood executives in admissions of illegal activity. In that goal, Deleiden failed. However, in the year between recording footage of conversations between Planned Parenthood executives while themselves posing as stem cell researchers and the video being released, Deleiden directed that the raw video be ‘creatively edited’ in order to give the very strong impression that Planned Parenthood was engaged in the deliberate use of unethical techniques for the purpose of harvesting ‘baby parts’ to sell for a profit. In creating this impression that PP was out to ‘kill babies and sell the parts’, Deleiden was somewhat successful.

After a year of editing and injecting context through narration, the video titled, “Planned Parenthood’s Top Doctor, Praised by CEO, Uses Partial-Birth Abortions to Sell Baby Parts” was posted on July 14th, 2015. The video spread like wildfire over the internet. Anti-choice activists went apoplectic over the ‘revelation’ that Planned Parenthood was slicing and dicing living babies to get at those sweet, lucrative, baby-organs and turn a massive profit.

Of course, this was abject bullshit. Planned Parenthood, like many medical facilities, give their patients the option of donating tissue for use in research. If a request for certain tissue is made, PP provides the material and is only compensated for the cost of storage, transport, and processing. In other words; they make ZERO money from ‘baby parts’.

Nonetheless, the video spread its insane narrative far and wide. Far enough for Dear to watch it, along with all the other insane anti-choice propaganda he consumed to feed his growing hatred for an ‘enemy’ that did not exist in anywhere near the form he imagined. Apparently it was that video, after stewing in his chaos-pit of a head for a couple of months, that set him off.

But Millions of other gullible fools who buy into every horror story that confirms their biased world views saw and believed the video. Robert Dear may have been the only one to kill people over it, but he wasn’t the only one who acted on the lie. That lie launched over a dozen investigations to find ‘wrongdoing’ by PP. Added together, the cost to taxpayers, for three congressional, one Justice Department, and nine different state investigations was astronomical. Many states cut funding to the local PPs based on the lies in the video.

In response to the shooting, the CMP stated: “The Center for Medical Progress condemns the barbaric killing spree in Colorado Springs by a violent madman.” Because of course they can hide behind ‘plausible deniability’.

If we work back through recent history, however, we can see very clearly that individuals do not resort to violence from inside a vacuum. They are programmed, like any terrorists,  in alignment with their ignorance and fears, to develop an abiding hatred for those they are conditioned to despise. In some cases, the fears are well-founded, in most cases, the fears are not. In all cases, uncivilized violence is seen by the perpetrators as the solution of last (or sometimes first) resort. For those who are prone to violence to begin with, pushing them to cross that line is only a matter of choosing the right language to compel them.

On January 6, 2021, a crowd of pro-Trump rioters stormed the Capitol Building in the moments that elected officials were discharging their Constitutional duty to formalize the electoral victory of president-elect Joe Biden. Like Robert Dear, those rioters did not develop their mindless rancor in a vacuum. They were there because they were commanded to be there by Donald J. Trump; the man they worshipped as a savior. Think I’m exaggerating? I shit you not: 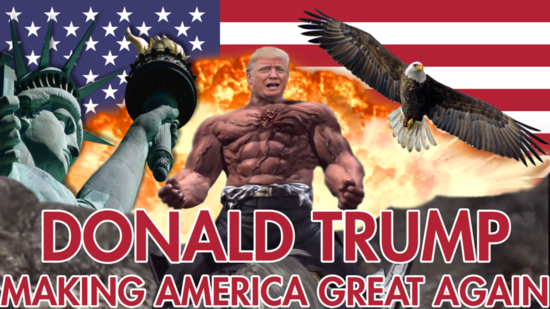 (Yes, this was done by a Trumpster) 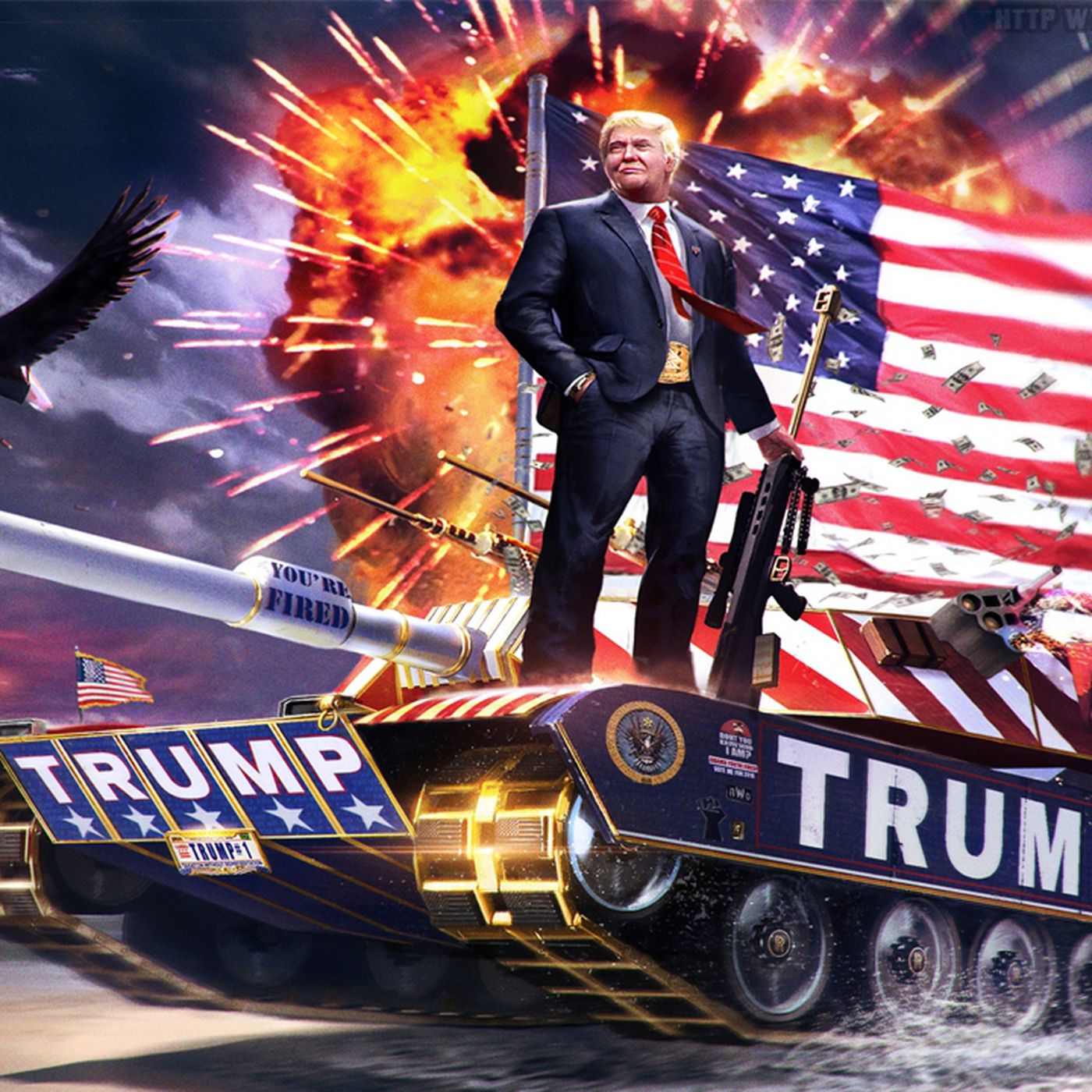 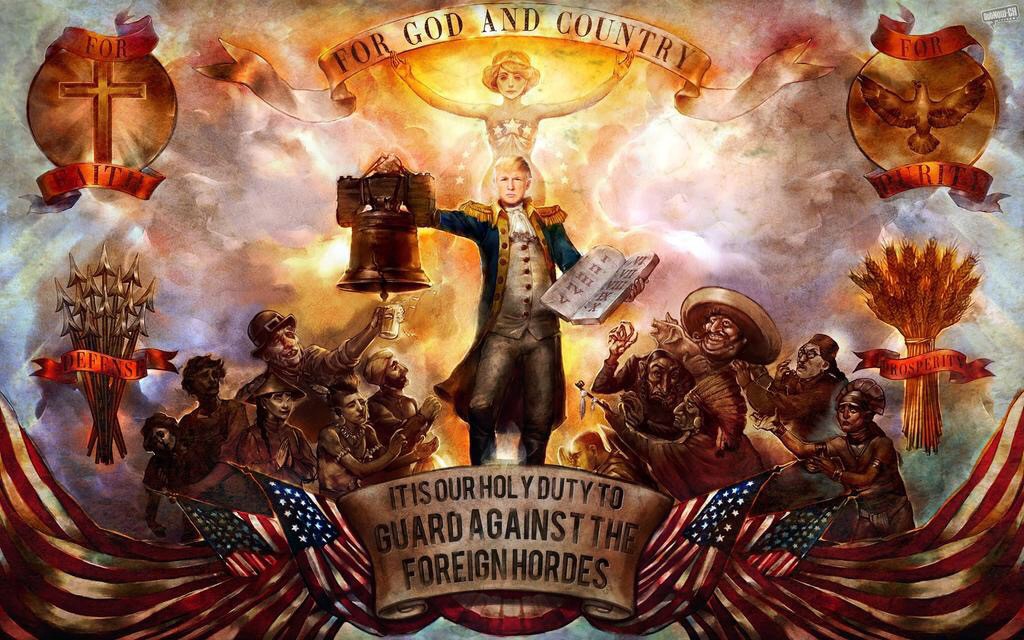 (Stop laughing, this is not a joke…) 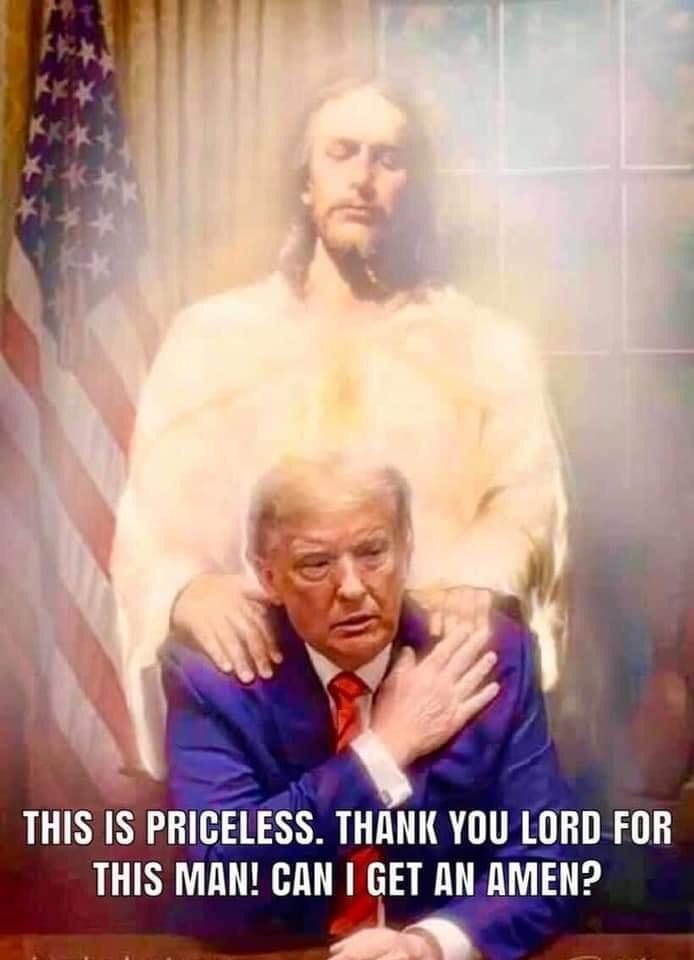 (Yes, they really believe this shit.)

Many times I have said: “We expect of others what we expect of ourselves.” There’s a reason that conservatives accuse others of ‘worshipping’ people like Obama, Al Gore, and Hillary Clinton. It’s because they have a hard time understanding any distinction between ‘support’ and ‘worship’. To them, to do the former is to do the latter in most cases. Hell, they have trouble distinguishing ‘agree with’ from ‘worship’.
With Trump, they were ‘all in’ from the beginning. Every word he spoke was the ‘unvarnished truth’ despite his being literally the lyingest POTUS in history. Every act, every behavior he exhibited was because of his ‘strength’… not because he was a bully or buffoon. If you talk to these people, you will be left without a doubt that they believe him to be infallible. And so, they not only ‘hang on his every word’, they are willing to literally ‘hang people on his word’. 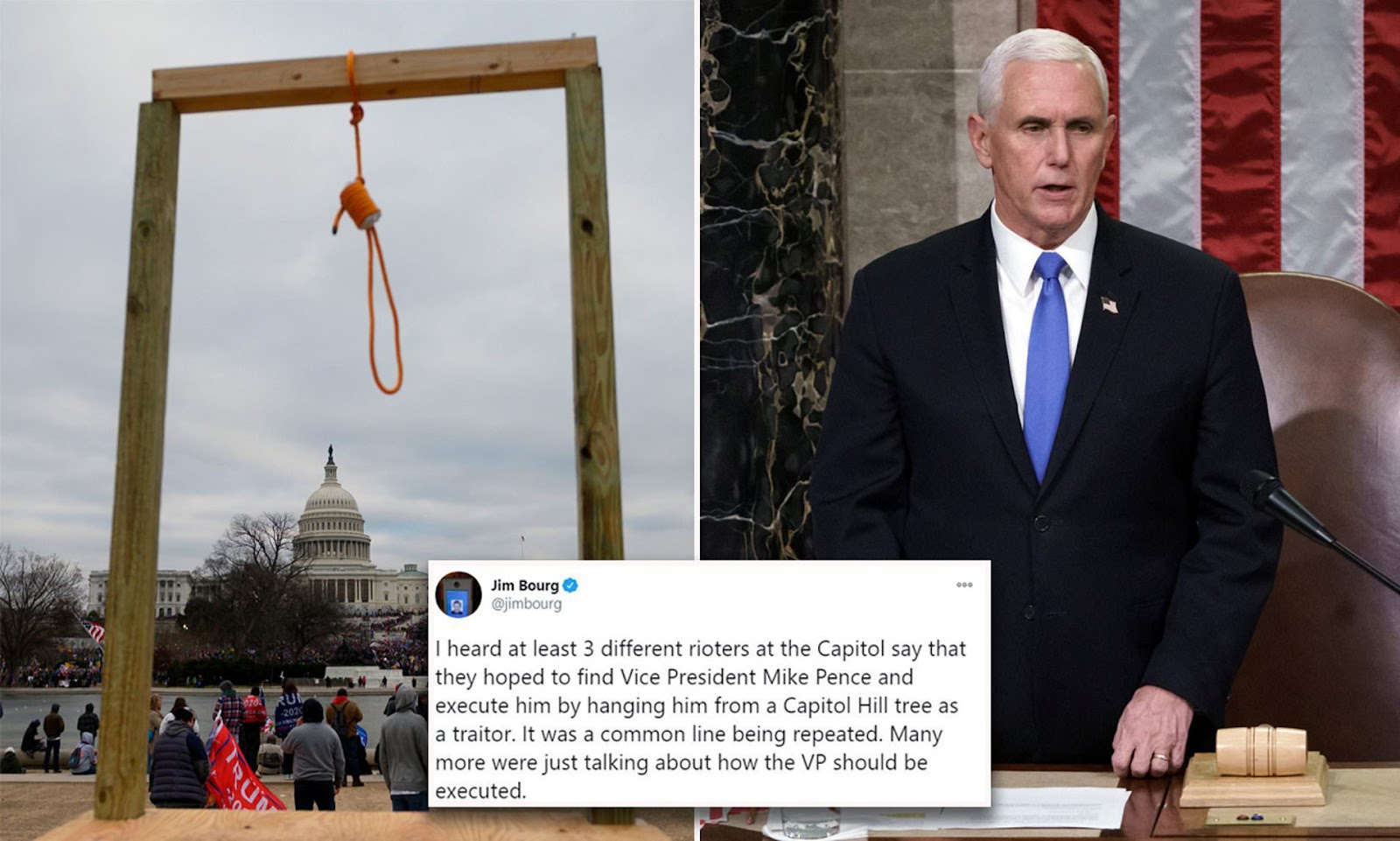 We should thank whatever powers of will, coincidence, or luck that we believe in that the rioters did not get ahold of any of our lawmakers. Had they harmed any of them as they clearly intended, the only upshot is that Senate Republicans would have taken the issue much more seriously. LOL! Just kidding! They still would have stopped any non-partisan fact-finding commission to look into that day. So no, it would have been horrible no matter what.
But five people died, including one rioter, as a result of the insanity of the Trumpsters.

So just what did Trump tell them to get them in such a murderous mass of marauding stupid?

“The election was stolen.”
That’s right, Trump, the single greatest liar in all of POTUS history, claimed that he ‘really won’ the election. He told millions of intellectually unburdened cultists of his personality that the election was ‘stolen’ from him, and therefore from them. “It’s a crime!” they screeched. So much so that they felt the only recourse was mass violence. Of course it wasn’t stolen, but we’re not talking about sane, rational people. Just look back up at the images of Trump worship. Those are real. These people literally believe Trump is tantamount to a transcendent being whose every word is the perfect truth. They may not outright admit to that, but in their words and actions it becomes evident. One of those actions was to storm the Capitol… so there’s that.

This is not over. These people, like Robert Dear, Cesar Soyac, Christopher Hessen, The Boogaloo Boys, Patrick Wood Crusius, and so many others who are influenced daily by messages of hatred based on lies, will continue to commit acts of violence with more frequency and greater casualties year after year. This is not a matter of ‘whether’, this is a matter of ‘how soon and how bad’. Incitement to violence, even if indirect, should never be considered ‘protected free speech’. This will continue until WE decide as a nation that it has to end.

As a major proponent of free speech as sacrosanct, I can never, ever advocate for the silencing of any opinion or voice. Our Forefathers believed, perhaps too optimistically, that the truth would win out in the marketplace of ideas. This is still possible. However, there is certainly an option. It is not a coincidence that the violence comes from the right in this country. It is because the right wing corporate media that feeds people Bullshit, and the cottage industry that supports and reinforces that Bullshit, are interested only in corporate profits and enriching themselves. As with Trump and his desperation to hold on to power, people will say anything for financial or political gain… even if it costs lives.
So when ‘Free Speech’ costs someone their life, just like shouting ‘Fire!’ in a crowded theater could, the speaker must be held accountable. What is happening now is the national equivalent of people yelling “FIRE!” when there is none.

For the time being, civil suits are a possible venue. Right now, EVERY person who has lost a loved one because of something that loved one heard on Fox or from Rush Limbaugh (Rot in Purgatory), or because they were killed by someone who listened to Trump or Tucker Carlson or anyone who spread a dangerous lie, should be suing the bloody blue blazes out of them. In fact, if you’ve read this article and know anyone who has suffered at all due to the mendacity of any media personality or politician, tell them to call an attorney. Not every case will fly, but it is time to raise national attention to the poison that is being spread among us and harming people as a result.
The real solution, of course, is to push for legislation that will levy criminal charges on anyone who can be shown to have influenced others to commit harmful or deadly acts. There is exactly ZERO shadow of a doubt, even among Trump’s allies, that Trump was responsible for the storming of the Capitol on January 6th, 2021. He is therefore responsible for every death and injury that happened. Just as CMP is markedly responsible for Robert Dear murdering 5 people, anyone who can be directly implicated in committing ‘Stochastic Terrorism’ (incitement to violence by proxy) must be held accountable for the damage they do, the suffering they spawn and the death they cause.
If we do this, free speech will be untouched. No one will be ‘prevented’ from stating a belief or making an argument. The only difference is that people will have to think twice about whether what they say might incite someone to engage in deeply misguided violence.
It might just get people, media figures, and politicians to be more ‘civilized’. The alternative is to give license to the Stochastic Terrorists that are the Lie Machine of this nation, and sit by, watching, as the right wing becomes more and more stoked, more enraged, and more violent. The alternative is to watch right wing violence increase in frequency and severity and the death count, including in law enforcement, rise as conservatives are fed a diet of poisonous, radioactive Bullshit.

Again; do you think I’m exaggerating? 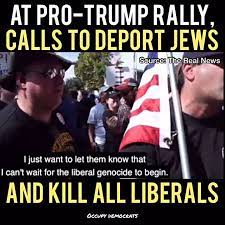 If you’ve paid any attention to my blog, you should know better by now.